A dinosaur theme fits perfectly with the “vocabulary” early literacy skill we are highlighting this month.

BOOK: Dinosaur Vs Bedtime by SHEA 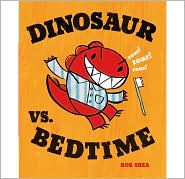 ACTION SONG: All Around the Swamp
Sing to: The Wheels on the Bus

LITERACY TIP: Vocabulary
Everybody knows at least one preschooler who can rattle off the names of dozens of dinosaurs. There’s a reason for that! Preschoolers’ brains are wired to learn as much vocabulary as possible. So don’t underestimate them: give them all the words you can! Use the most specific terms possible and they will soak them up like a sponge.

FLANNEL SONG: A Hunting We Will Go*
I know dinosaurs came in all shapes and sizes, but we went with big things today: house/mouse, whale/pail, boat/goat, tree/bee. 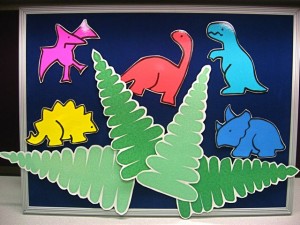 One dinosaur went out to play
On a giant fern one day
She had such enormous fun
That she called for another dinosaur to come:

Five dinosaurs went out to play
On a giant fern one day
They had such enormous fun
That they played until the day was done!

This entry was posted in Flannelboards, My Baby Storytime. Bookmark the permalink.