Caldecott at the Jail

My district, in conjunction with the sheriff’s office, runs a library at our county jail, and I visit several times a year and talk to the parents about the importance of reading to their kids. But this week and last week, for the third year in a row, I took a pile of possible Caldecott contenders and booktalked them with a few groups of inmates.

This is pretty much my favorite program of the year.

I feel it serves a few purposes: It introduces some great books to the group, titles they won’t see in the jail library but they might recognize later if they are in a bookstore or library with their kids; and it sets aside some time to talk about and think about art, which is always important but sometimes a luxury. Mostly, though, I like this program because it’s a no risk, no consequences opportunity to connect with books. For many of the patrons at the jail, reading is stressful and difficult, and not a source of pleasure. Yet we tell them over and over that they should be reading with their kids, and fostering a love of books in their homes. What a huge undertaking that must seem when your own reading experiences are negative! How do you possibly begin?

I hope that programs like this one help a little with that. I’m not trying to teach which books are best for which ages of kids; I’m not asking for anyone to discuss or remember their past experience with books; I’m not giving any homework; I’m not even asking them to READ anything. I’m just showing them some fabulous illustrations, telling them a little about the stories in the books; sharing a bit about the artists and how they created the pictures; and giving them the books to hold and explore and look at for awhile.

I hope it’s a safe place, for an hour, for them to be enthusiastic about books.

And you know what? They always are.

They laughed at Bink holding up the goldfish to see the movie in the theater. They laughed at ME when I told them I was grossed out by the pictures in Here Comes the Garbage Barge. They LOVED the dinosaur in Chalk. One guy told me the messed-up outline of Art (after Max tries to untangle him) in Art & Max reminded him of Calvin & Hobbes. One inmate showed me his pencil sketches, which were easily as good as anything I had just shown him in these books. One woman told me I should go to the Art Institute of Colorado and look at what they have on display, and described several of pieces she loved from when she took classes there.

This year, the staff librarian told me when she passed around the sign up sheet, some of the ladies remembered the program from last year! They wanted to know if I was bringing “the book about the cows” again. (14 Cows for America). I hate knowing that some of the inmates have been in jail that long–it’s even more frustrating to know that some of them have been released and have returned in that time. But it’s very, very satisfying to know that an hour-long program 12 months ago left such a pleasurable impact.

For those in the group who ARE readers and DO read to their kids, this program is a great affirmation of their efforts. They recognize some of the books I bring and can tell me stories about which titles their kids love and share their own experiences with me and the group. This year, the jail librarian used some book covers from last year’s program to illustrate the sign up sheet for this year’s talk. Afterwards, one of the women wanted to ask me about Let’s Do Nothing–one of the titles on the sign up sheet–she wanted to know if it had won anything last year. I said no, but told her that Bink & Gollie was by the same illustrator! She said, “I almost asked you that when you showed it to us!” What a great moment–Let’s Do Nothing was her daughter’s favorite book and she could recognize Tony Fucile’s style in Bink & Gollie.

They are thoughtful, too. Two years ago when I showed one group We Are the Ship, I talked about the Caldecott, but also how Kadir Nelson was also eligible for the Coretta Scott King Awards. One man asked me if the Caldecott committee would be likely to pass over We Are the Ship if they figured it might be a shoo-in for the King…which was the same speculation I heard in some library world conversations that year.

This year I showed Dark Emperor and A Sick Day for Amos McGee, and we wound up talking quite a bit in the ladies’ group about woodcuts and prints. They were really impressed with the time and effort and skill that went into this type of art. They checked with me a couple times about what the committee could consider: “So they can’t count how much time it takes to do this?”

When I describe how the the Caldecott is only given to the artist, and how the author shares the glory but doesn’t share the award, sometimes they are a little indignant! One gentleman wanted to know if there was an award just for the authors. He was happy when I told him about the Newbery, and about the Zolotow; he also made sure to vote for two different books on his ballot! 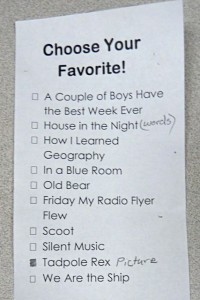 I give them a ballot and ask them to vote for their favorite, so I can add their votes to our library’s online poll. They look at some of the books again and think it over. The top pick this year was Chalk for both groups, with the guys choosing Here Comes the Garbage Barge next and the ladies liking Art and Max. This year many of them wanted to give me their top three, instead of being limited to choosing just one.

What am I going to say? No?

Every vote is a win. 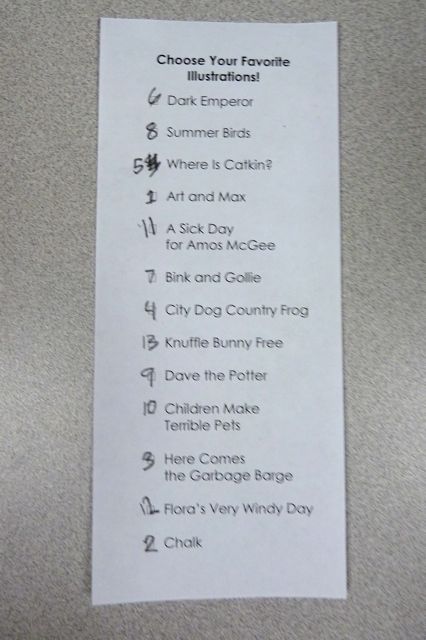 This entry was posted in Book Awards, Jail. Bookmark the permalink.

10 Responses to Caldecott at the Jail