This week is the 46th anniversary of the first Moon Landing! I didn’t know that when I planned my Moons and Rockets storytimes for this week, but it was happy coincidence when I found out.

I was subbing for Toddler and Family storytimes in addition to my usual babies, and I wanted to make a new flannel set that I could use in different ways all week. Our storytimes are limited to around 25 kids, so whenever I can, I like to make enough pieces for everyone to hold one just in case that type of activity works out.

Some of the books I knew I would be using were: 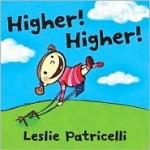 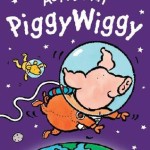 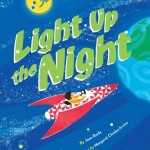 The set I made had pieces that linked to these books in different ways: 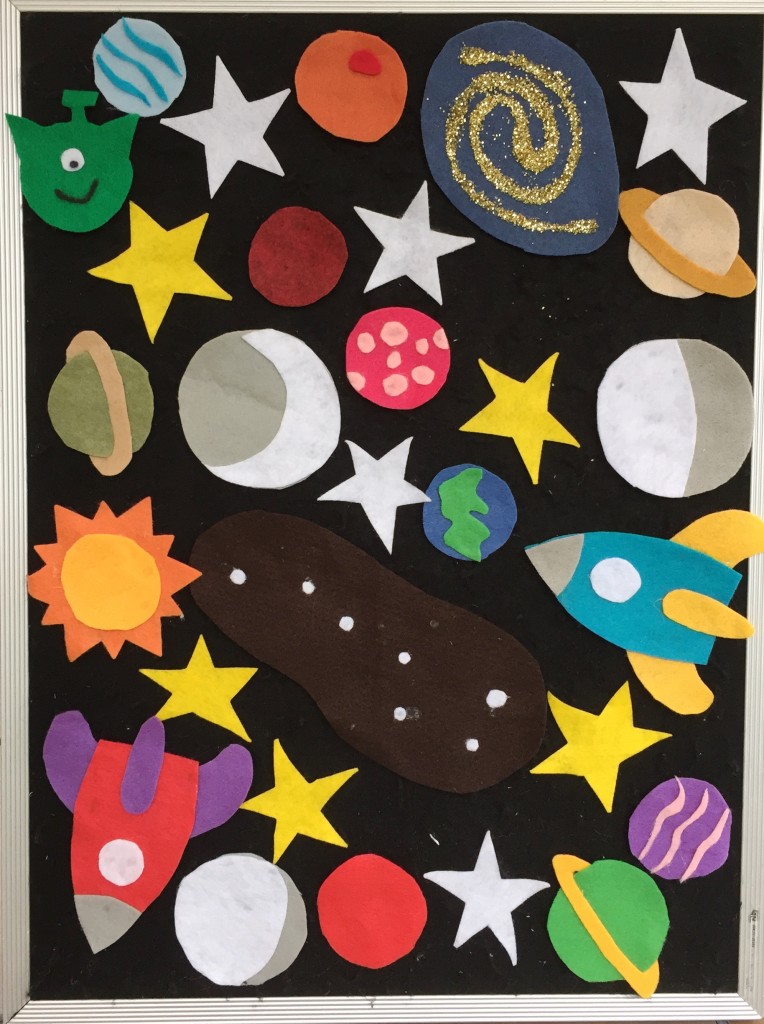 The set includes: five yellow stars, five white stars, three moons in different phases, one sun, two rockets, ten planets in different colors, one constellation, one alien face, and one glittery galaxy. So, there’s at least one alien in all three books, and a rocket in all three, and Light Up the Night has planets and constellations, you can see the Earth in Higher! Higher!, and so forth.

I used these pieces in a few different ways, depending on whether I was working with toddlers, or older kids, or had small groups or large groups.

Once I handed everyone in a 10-15 child toddler group a star, planet, or moon, and first asked the kids with yellow stars to come up and put them on the board, then the white stars, then moons, then planets. Yes, it got a little mixed up as kids became excited. No, we did not put everything up in perfect order. But it was manageable and at the end we looked at our outer space scene and oohed and aahed. Then we sang Twinkle Twinkle Little Star together!

Once I only had two 3 & 4 year old kids! So I gave them each a stack of pieces and they took turns putting them on the board wherever they wanted. I kept up a running commentary, saying things like, “Oh, you put that white star near the other white stars! Nice sorting.” and “That planet is purple with pink stripes…I notice that’s kind of like your t-shirt today.” Again, when we were all done, we sang Twinkle Twinkle together. After storytime, since there were so few of them, I gave them the pieces again to play with during our play time. When they were all on the board this time, I started playing “I Spy:” “I spy a red planet near a yellow star.” “I spy a rocket that is blue and yellow.”

For the big kids in a large group, instead of giving them each a piece, I chose 10 pieces and put them on the board. If we had just read Light Up the Night, I asked them to remember some of the things we saw on the outer space pages. As they remembered things like planets, rockets, stars, I put them on the board from my pile. When we had all 10 pieces up, I told them we were going to play a game, and I was going to take one piece away and see if they could figure out which one it was. I held up a the lid to a large plastic bin so they couldn’t see what I picked. 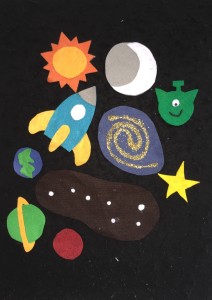 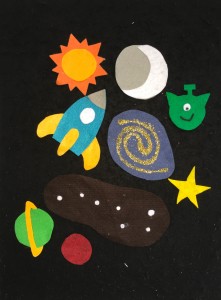 Something ELSE you can do with these pieces, with a smaller group and older kids, is to hand out some of the pieces and then invite the kids to help you make a chart to see how many of each type there are. Here I used cotton string stuck to my very old fuzzy flannelboard to make a grid, then filled it in with the shapes. (You could also use cheap hairy acrylic yarn on a less fuzzy flannelboard, or masking tape, to do the same thing.) 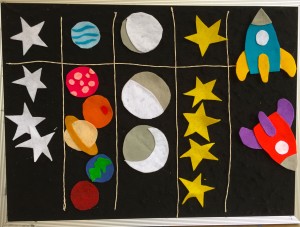 You can see I chose pieces for the chart that I had at least 2 shapes for: so one of the shapes could go on the top row as the “header.” Ta-dah! STEM! Math! Counting Sorting! Matching!

If you have too many kids to hand out, or kids who are too squirrely, to have them come to the board, you can sing a simple song as you put the pieces on the board. I often sing “I’m Going to the _______” to the tune of Farmer in the Dell, as I pull out props or show photos or put flannel pieces on the board. In this case, for one group, I sang,

I always stop in between each verse and talk about what we just put on the board: “This planet is blue and green. Does it look like a planet you know? Yes, the Earth! Our Earth has blue oceans and green continents.” etc.

I love making big sets like this because there’s so much to do with them! What would you do with these pieces?

Today’s Flannel Friday Round Up is hosted by Lisa at Libraryland. Check her blog tonight or tomorrow for everyone’s links!