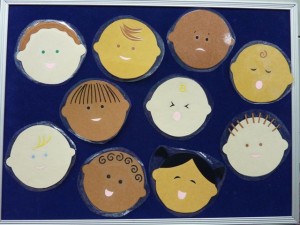 Babies love to look at baby faces, so I made these pieces to use with some counting rhymes. I don’t have a template for you, but they are pretty easy to make, I promise!

Draw about a 5″ circle on construction paper with a compass or trace a roll of masking tape or something. Now visualize Charlie Brown and draw two semicircles sticking out at 3 oclock and 9 oclock for the ears. The eyes go on even with the top of the ears. I used a hole punch for the open eyes! Add eyebrows, mouths, and hair and you are ready to go. I laminated them and put a velcro dot on the back. You can see a slightly larger image here.

Here’s a few things you can do with these babies!

This entry was posted in Flannelboards. Bookmark the permalink.