Last spring I had the fun of visiting my friend Priscilla’s LIS class, “Early Childhood Materials & Services.” It’s a class we developed and taught together a couple of times for the Early Childhood Librarian Fellowship program in the University of Denver School of Library & Information Science. Last spring I had too much on my plate to teach, and Priscilla graciously & VERY capably took on the class by herself–but I snuck in a visit as a guest lecturer!

I tweeted this picture of the activity I prepared for the group, and promised to blog about it–and, oh, 12 months later I finally am. 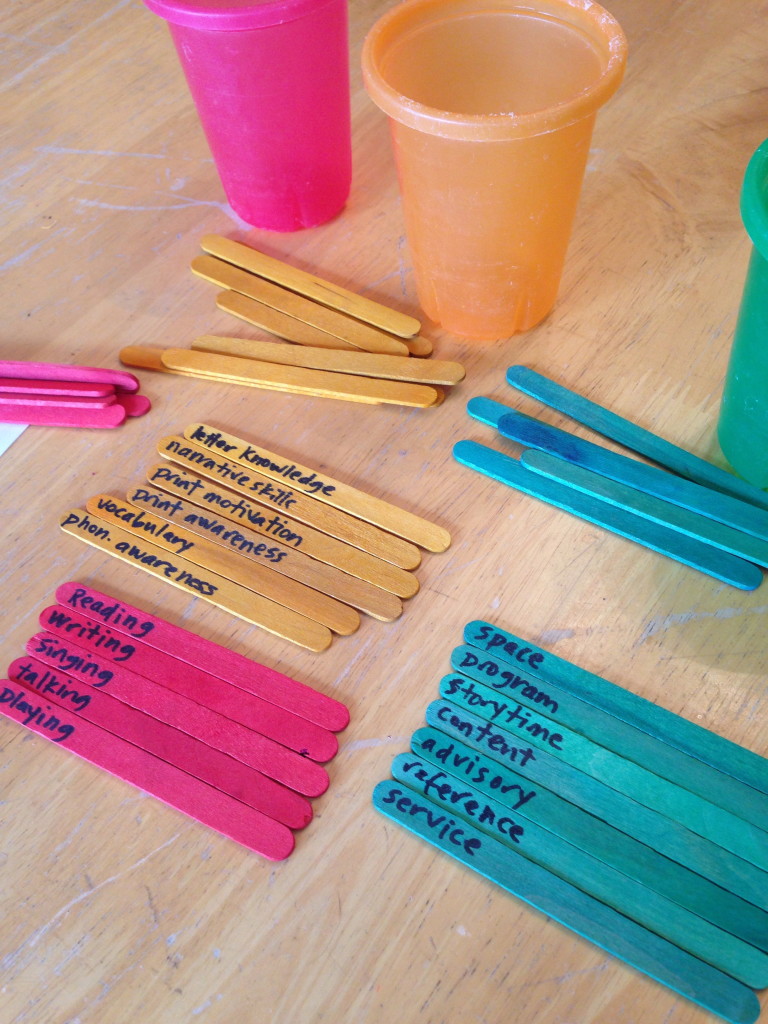 We started by talking about connecting early childhood services and library mission statements, and Priscilla and I shared that when we first started teaching this course, youth services professionals were working hard to show library decision makers that early learning and early literacy were essential aspects of the public library’s mission.

Several years later, the conversation is less and less about convincing people about the value of supporting early learning. There’s more and more agreement that storytimes are vehicles for early literacy and can support parent education, which is great. Now the conversation is more about how ELSE can we support our children’s learning? How else can libraries help families build early literacy skills in their children?

So I gave the class a brainstorming activity, to see if we could come up with strategies for children’s services, separate from storytime, that would support & model early literacy learning.

This is what we did:

I had that set of colored popsticks for them from the picture.

(Yes, this was totally inspired by Guerrilla Storytime, thank you, Storytime Underground!)

Each pair of students took one popstick from each color. They could do a couple of different things:

If they struggled, I told them to skip the yellow “skills” stick.

Disclaimer! This exercise was NOT to tell them they should cram their future children’s areas with every possibility we generated. It was NOT to give them a checklist of things to do around each and every ECRR early literacy practice. It was NOT to suggest there was a viable service idea hidden in every single combination of popsticks.

Instead, it was meant as a way for them to think broadly about the relationship between the programs, materials, and services they might encounter in their future children’s areas and the early literacy skills & practices they were learning in class. I wanted them to have practice seeing that early learning is ALREADY embedded in youth services in many different ways. That early literacy is everywhere, inside AND outside of storytime. I wanted them to prepare themselves to be intentional about building and creating services in their future libraries.

Why? All libraries have limited resources. If you are advocating for new programs and services for your department, you are usually going to need a better sell than, “Hey, this looks like a cute idea.”

So that was part one of the exercise! Come back Tuesday for part 2!

Do you want to play? Leave a comment with what comes to your mind when you mix and match these concepts!