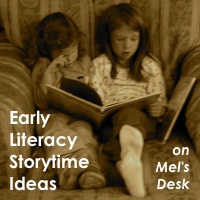 Here’s a way to add some alphabet learning to your storytime! Knowing the names of letters is often the first alphabet skill children learn. But we all know how the letter names LMNOP all get squished together when we sing the ABCs to the traditional tune of “Twinkle Twinkle Little Star!”

One thing you can do in storytime is sing the ABCs to a different tune. Add a comment to the parents about why you’re doing this so they know it’s not just to be tricky and cute, but it will help their children hear the separate names of the letters.

First, sing the traditional version of the ABC song with your families. There are lots of ways to segue into this if you feel you need a transition (I *love* transitions!). You can notice the letters on the children’s nametags, or on the cover of the book you just read (“That was Three Little Bears. Look, I see a T and an L and a B. I bet you know a song about ALL the letters!”), or lead into it after you sing any song together (“That was fun! Let’s sing another song we know. Let’s sing the ABCs!”).

Then tell the parents, “When you sing the ABC song to different tunes, it gives your child another way to hear all the names of the letters–especially the ones that get run together, like LMNOP. Knowing the letter names is an important first step to knowing letter shapes and sounds. Let’s try to sing the ABCs a different way. Let’s try _______ . We’ll probably goof up a little, but it will be fun!” Give them the name of the tune you’ve selected. You might want to hum the melody first to get it into the grownups’ heads, then sing it together. Have a good time!

There’s lots of tunes that will work, but I’ve got a handout that maps out the letters to a few different songs if you need a place to get started.

Updated October 2015: The wonderful Jbrary team recorded themselves singing all the tunes on the ABC handout! Thank you!

This entry was posted in Early Literacy Storytime. Bookmark the permalink.