I am continuing my Outer Space theme with this alien set! 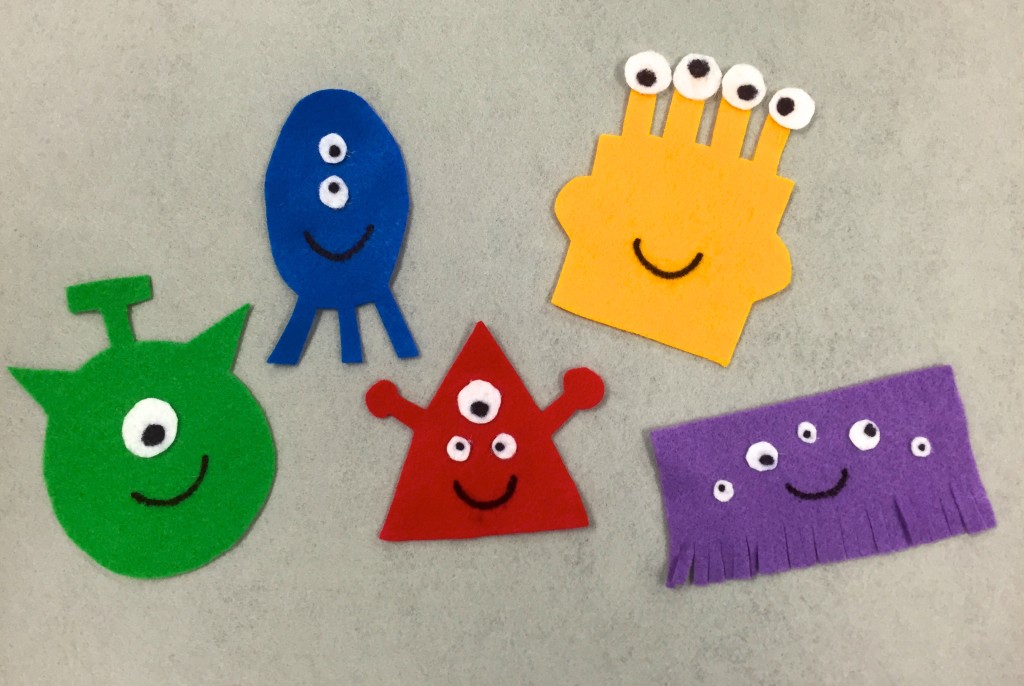 My green alien came from Library Quine’s 5 Little Men in a Flying Saucer, unfortunately she says her pattern source is no longer available. I was able to recreate the shape from her pictures though!

My inspiration for the other aliens came from Miss Mary Liberry’s easy-peasy monster tutorial. Each of my aliens, like her monsters, have a different body shape, different appendages and antennae, and googly eyes. Except I didn’t have the right size googly eyes at home so I spent some quality time cutting very tiny circles out of white felt and dotting on Sharpie pupils. And then lay down for awhile with a cool cloth on my forehead because seriously.

I wanted each monster to have its own color, shape, and number of eyes, so we would have plenty to talk about! In fact I am daydreaming about making a large set of these creatures, where the triangle-shaped one would come in all the other colors, not just red, and the square one would come in all the other colors besides yellow, and so forth. Then I could hand them out and put a spaceship or planet shape on the board, and have all the red aliens come home, or all the rectangle aliens, or all the ones with 4 eyes.

One alien went out to play
In the Milky Way one day
She had such enormous fun
That she called for another alien to come.

Two aliens went out to play…

There’s another version at Jen in the Library’s Outer Space Storytime post, and a few more 5 Aliens rhymes at the Sturgis Kids wiki, plus a different one from Vivian at As I See It.

There’s also fun stuff at the Flannel Friday Pinterest Outer Space board and some monsters-who-could-double-as-aliens on the Halloween board.

Kathryn has the round up at Fun with Friends at Storytime today! Check it out for more great ideas for storytime. Investigate the Flannel Friday Pinterest for hundreds of flannelboards, songs, games, and rhymes arranged by theme. Ask questions and brainstorm ideas in our Facebook group. Learn more about Flannel Friday and upcoming hosts at our website.