Oh No! a Book Talk Technique for Dig In to Reading

A few months ago, I was able to participate in a Book Talk Week at my daughters’ old elementary school library. I visited with 1st, 2nd, and 3rd grade groups, and I wanted to do something a little different. I had fallen in love with Oh No! by Candace Fleming and Eric Rohmann, especially how the story began on the front cover, incorporated the endpapers and title page, and continued seamlessly to the first page of the story. I thought there was a lot to uncover about the story separate from the text and thought it would be fun to explore together. 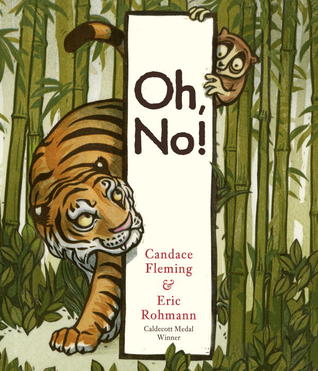 So I brought it in a big envelope & didn’t show it to the group. I also brought the first two verses of the text typed out on a piece of paper. I started by talking with the kids about some of the information we can learn about a book by looking at the cover (character, setting, mood, etc), but told them we weren’t going to look at a cover first today! Instead, I told them the title, and we thought about the title together and talked about if we knew anything more about the story now. (A little maybe about the type of story, they decided, but not about setting or characters.)

Then I read the first two verses from my typed paper, and when I was done we talked some more about what we knew NOW about the story (they decided that they knew at least one character, and that the setting had a hole–but when I asked about that, they realized the hole could be in a city, or in the country). We guessed whether there would be more characters in the story, and they guessed where the setting might be, and finally I took the book out of the envelope and we looked at the cover together, and talked about what additional information we had about the story and setting and characters. (Oh! It’s going to be a hole a jungle. Where is the jungle? Well, that looks like bamboo, doesn’t it? Where does bamboo grow?) There’s a tiger, and definitely some other animals as characters too. We talked about if the tiger was going to be friendly or not, and how we could tell.

When I opened the cover, we spent some MORE time looking at the end papers, figuring out what was happening already in the story, wondering where the hole was that they had heard me read about. We turned to the title page, and I pointed out how the title works as the first line of the story.

They had so many great things to say and solid predictions to make. FINALLY we settled in and I read the whole thing. When I was done with the text, I asked if that felt like the end of the story. Some said yes, some said no…and I turned the last page so we looked at the end papers, and saw those orange stripey paws pulling the tiger out of that hole! Oh no!

The kids did a great job thinking critically about the book, and I heard later from the teachers that they loved having a “mystery book” at their library visit. It was a VERY fun discussion for me to lead and we got to pay attention to different parts of the physical book (end papers, cover, title page, jacket flaps, copyright info) as well as parts of the narrative (setting, characters, conflict, resolution).

I was thinking that this might work with a number of new titles (“new” because I do think it would work best with one most of the kids haven’t seen yet) and tell the kids you are going to Dig Into a Book together. This could be expanded into a full program, either by “uncovering” a couple of “mystery” books together, or adding in a related craft or extension activity after your discussion. Or you could do this for your school promotional visit for Summer Reading. Or you could make a Dig Into Books–What Will You Discover? display, and cover up some great picture books or chapter books with brown paper, and write the first sentence or the first paragraph on the wrapper. (This is a borrowed idea from the Blind Date with a Book Displays!)

1 Response to Oh No! a Book Talk Technique for Dig In to Reading